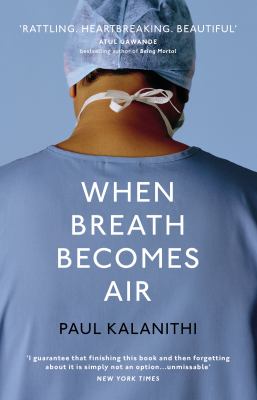 At the age of thirty-six, on the verge of completing a decade's training as a neurosurgeon, Paul Kalanithi was diagnosed with inoperable lung cancer. One day he was a doctor treating the dying, the next he was a patient struggling to live.  When Breath Becomes Air chronicles Kalanithi's transformation from a medical student asking what makes a virtuous and meaningful life into a neurosurgeon working in the core of human identity - the brain - and finally into a patient and a new father.  What makes life worth living in the face of death? What do you do when when life is catastrophically interrupted? What does it mean to have a child as your own life fades away?  Paul Kalanithi died while working on this profoundly moving book, yet his words live on as a guide to us all. When Breath Becomes Air is a life-affirming reflection on facing our mortality and on the relationship between doctor and patient, from a gifted writer who became both. 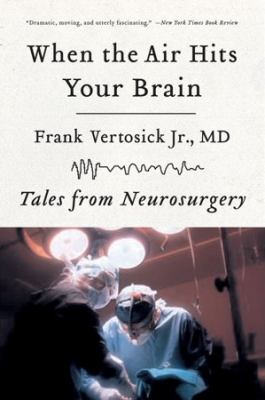 When the Air Hits Your Brain

The story of one man's evolution from naïve and ambitious young intern to world-class neurosurgeon. With poignant insight and humor, Frank Vertosick Jr., MD, describes some of the greatest challenges of his career, including a six-week-old infant with a tumor in her brain, a young man struck down in his prime by paraplegia, and a minister with a .22-caliber bullet lodged in his skull. Told through intimate portraits of Vertosick's patients and unsparing yet fascinatingly detailed descriptions of surgical procedures, When the Air Hits Your Brain--the culmination of decades spent struggling to learn an unforgiving craft--illuminates both the mysteries of the mind and the realities of the operating room. 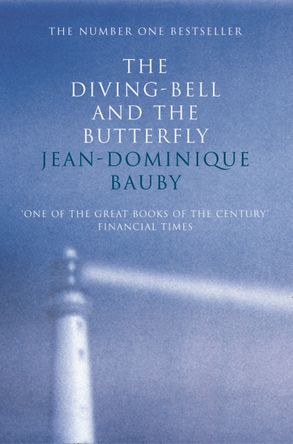 The Diving-Bell and the Butterfly

On 8 December 1995, Jean-Dominique Bauby suffered a massive stroke and slipped into a coma. When he regained consciousness three weeks later, the only muscle left functioning was in his left eyelid although his mind remained as active and alert as it had ever been. He spent most of 1996 writing this book, letter by letter, blinking as an alphabet was repeatedly read out to him. 'The Diving-Bell and the Butterfly' was published in France on Thursday 6th March 1997. It was immediately hailed as a masterpiece. And then, three days later, he died. 'The Diving-Bell and the Butterfly', which records Bauby's lonely existence, is probably the most remarkable book about the triumph of the human spirit, the ability to invent a life for oneself in the most appalling of circumstances, that you will ever read.  Cover image copyright Harper Perennial publisher. 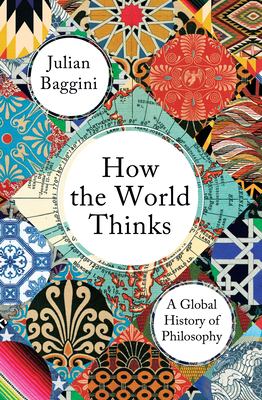 How the World Thinks

One of the great unexplained wonders of human history is that written philosophy flowered entirely separately in China, India and Ancient Greece at more or less the same time. These early philosophies have had a profound impact on the development of distinctive cultures in different parts of the world. What we call 'philosophy' in the West is not even half the story. Julian Baggini sets out to expand our horizons in How the World Thinks, exploring the philosophies of Japan, India, China and the Muslim world, as well as the lesser-known oral traditions of Africa and Australia's first peoples. Interviewing thinkers from around the globe, Baggini asks questions such as: why is the West is more individualistic than the East? What makes secularism a less powerful force in the Islamic world than in Europe? And how has China resisted pressures for greater political freedom? Offering deep insights into how different regions operate, and paying as much attention to commonalities as to differences, Baggini shows that by gaining greater knowledge of how others think we take the first step to a greater understanding of ourselves. 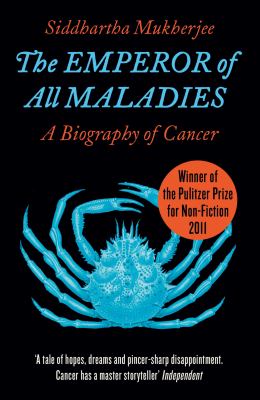 The Emperor of All Maladies

In The Emperor of All Maladies, Siddhartha Mukherjee, doctor, researcher and award-winning science writer, examines cancer with a cellular biologist’s precision, a historian’s perspective, and a biographer’s passion. The result is an astonishingly lucid and eloquent chronicle of a disease humans have lived with - and perished from - for more than five thousand years.  The story of cancer is a story of human ingenuity, resilience and perseverance, but also of hubris, arrogance and misperception, all leveraged against a disease that, just three decades ago, was thought to be easily vanquished in an all-out ‘war against cancer’. Mukherjee recounts centuries of discoveries, setbacks, victories and deaths, told through the eyes of predecessors and peers, training their wits against an infinitely resourceful adversary.  From the Persian Queen Atossa, whose Greek slave cut off her malignant breast, to the nineteeth-century recipient of primitive radiation and chemotherapy and Mukherjee’s own leukemia patient, Carla, The Emperor of All Maladies is about the people who have soldiered through toxic, bruising, and draining regimes to survive and to increase the store of human knowledge. 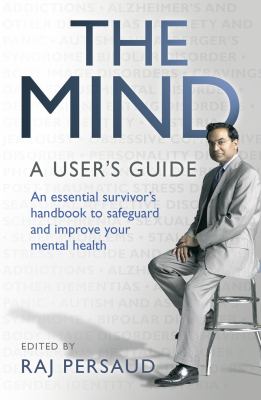 The Mind: a user's guide

This book has been written by distinguished experts and offers information on the latest research into brain and mind sciences. It gives distinctive descriptions of behaviour, feelings and thoughts relating to a variety of conditions - including Addictions, Body Image and Bipolar Disorders, Depression and OCD - and helps us to clarify and understand symptoms and treatments. This handbook also confronts and debunks some of the most damaging myths and misconceptions surrounding the subject of mental health. 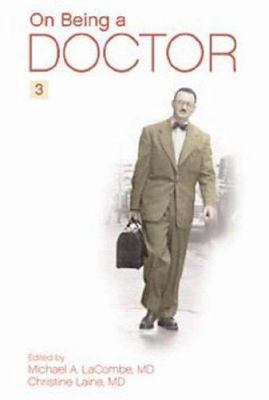 On Being a Doctor

If you are a physician who has felt the joy of patient care, the frustrations of bureaucracy, the satisfaction of a good catch, the anguish of a mistake, or the long sorrow of losing a patient, you will find sympathy and companionship in these pages. If you are patient who has been frightened by an illness or strengthened by enduring it, treated compassionately by one medical professional or coldly by another, cured by the miracle of science or made sadly aware of its limitations, you will meet others here who share your experiences and feelings. Personal narratives, poems, and other creative writing by doctors and patients has found a distinguished home in the Annals of Internal Medicine, one of the world's leading medical journals, for many years. On Being a Doctor offers a new selection of the best of this writing from recent issues of this journal.   Read them all for pleasure, for comfort, for wisdom, and for understanding! 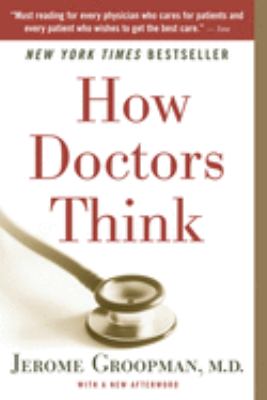 On average, a physician will interrupt a patient describing her symptoms within eighteen seconds. In that short time, many doctors decide on the likely diagnosis and best treatment. Often, decisions made this way are correct, but at crucial moments they can also be wrong -- with catastrophic consequences. In this myth-shattering book, Jerome Groopman pinpoints the forces and thought processes behind the decisions doctors make.  He explores why doctors err and shows when and how they can -- with our help -- avoid snap judgments, embrace uncertainty, communicate effectively, and deploy other skills that can profoundly impact our health. This book is the first to describe in detail the warning signs of erroneous medical thinking and reveal how new technologies may actually hinder accurate diagnoses. How Doctors Think offers direct, intelligent questions patients can ask their doctors to help them get back on track. Groopman draws on a wealth of research, extensive interviews with some of the country’s best doctors, and his own experiences as a doctor and as a patient. He has learned many of the lessons in this book the hard way, from his own mistakes and from errors his doctors made in treating his own debilitating medical problems. How Doctors Think reveals a profound new view of twenty-first-century medical practice, giving doctors and patients the vital information they need to make better judgments together. 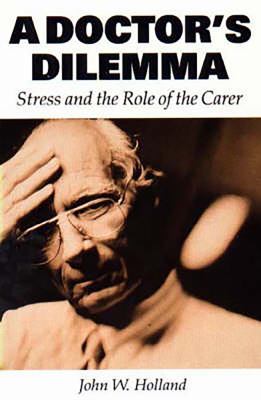 The work of a general practitioner can be highly stressful and the source of much of the stress is often the conflict that arises between the needs of the doctor and those of the patient. A doctor has to face many common but disturbing situations such as dealing with highly distressed people, seductive behavior and anger in the consultation as well as the demands of relationships with fellow professionals. This book examines and probes the forces that impact on the carer in order to understand and defuse the stress they cause. The author, a counsellor trainer as well as doctor, uses psychotherapeutic understandings to gain insight through the many examples he gives. 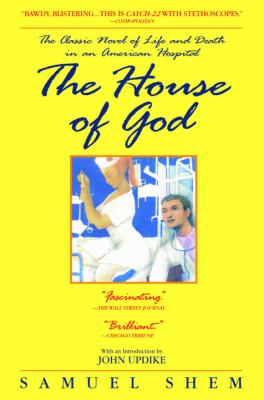 The House of God

The hilarious  novel of the healing arts that reveals everything your doctor never wanted you to know. Six eager interns  -- they saw themselves as modern saviors-to-be.  They came from the top of their medical school class to the bottom of the hospital staff to serve a year in the time-honored tradition, racing to answer the flash of on-duty call lights and nubile nurses. But only the Fat Man --the Clam, all-knowing  resident -- could sustain them in their struggle to  survive, to stay sane, to love-and even to be  doctors when their harrowing year was done.