Open access means that published research is freely available online and in many cases (depending on licence) available for re-use. Benefits to open access includes broadening worldwide access to your research and potential increase in citations.

RCSI is amongst the list of early endorsers of the new National Framework for the Transition to an Open Research Environment. The document sets out agreed national principles on Open Access to research publications, FAIR research data and the supports needed for this, and is aligned with European Commission policies in these areas. Work will commence shortly on a National Action Plan for implementation.

The Gold Open Access publishing model involves the authors paying for article publication (article processing fee or APC) in a journal but articles are then freely available to readers with no additional subscription charges. Providing the appropriate licence has been agreed, the article may then be shared and re-used. Many journals now offer complete or partial OA or hybrid publishing options. BioMed Central is a major OA publisher in medicine and healthcare. See the Directory of Open Access Journals to identify journals using this model.

RCSI Library has negotiated gold open access agreements with a number of publishers, details of these can be found here.

Also known as self-archiving, the Green Open Access route satisfies open access mandates by funding agencies such as SFI, HRB and HEA. This model allows you to deposit a version of your article in an institutional repository such as the RCSI Repository, the RCSI's publications repository. Benefits also include:

Permitted versions can be the final published pdf (if it has been published via the gold route), the original submitted manuscript or the accepted manuscript which incorporates changes from the peer review process. The Library team are happy to advise you on publisher permissions – contact us at repository@rcsi.com

Plan S is an initiative by a group of research funders to make publicly funded research outputs fully and immediately open access.  The international consortium (cOAlition S) is coordinated by Science Europe and includes Science Foundation Ireland (SFI), UK Research and Innovation, Research Council of Norway and others and is supported by the European Research Council and the European Commission. cOAlition S aims for a new model of publishing, characterised not only by immediate, free online access to, but also by largely unrestricted use and re-use of scholarly publications.

The key principle of Plan S is:

Full details of the principles here.

Implementation guidance has been provided by cOAlition S to flesh out the details of the principles and to include technical requirements.  Feedback was sought from interested parties and based on this feedback, a new edition of the guidance is expected in Spring 2019.

The Office for Scholarly Communication in the University of Cambridge have published a blog post called Plan S – links, commentary and news items, which attempts to compile a list of discussions and documents around Plan S.

cOAlition S recognises that the new model calls for research funders, institutions, researchers, learned societies, librarians and publishers to work together towards a system of scholarly publishing that is more accessible, efficient, fair and transparent.

The timeline for compliance has been pushed back to 2021, and some of the criteria for repositories and transitioning from subscription journals have been adjusted.
The main principles remain, that:
• No scholarly publication should be locked behind a paywall;
• Open Access should be immediate i.e., without embargoes
This can be achieved through an open access journal or an open repository such as the RCSI one, using either the published version (Version of Record) or the peer-reviewed manuscript (Author Accepted Manuscript).
More details at:
https://www.coalition-s.org/rationale-for-the-revisions/

Unpaywall Is a project of Impactstory, a not for profit company that aims to  make scholarly research more open, accessible and reusable. This is a free service that locates open-access articles and presents papers that have been legally archived and are freely available as open access. Unpaywall harvests content from over 50,000 journals and open-access repositories from all over the world.

How to install Unpaywall

Search for Unpaywall and turn it on by sliding the swipe to the right.  When you browse to a paywalled paper and an open access version is avaliable Unpaywall’s grey ‘lock’ icon turns green and ‘unlocks’, clicking on the icon will then bring you to the open access version of the paper.

RCSI has a number of agreements with publishers through IReL that allow RCSI corresponding authors to have articles made open access immediately with the publisher without payment of a further Article Processing Charge (APC). The tabs in this box detail the current agreements in place and information on eligibility and conditions, and an IReL spreadsheet listing all the journals involved is available:

RCSI is now part of a IReL agreement with the American Chemical Society. The IReL-ACS agreement allows eligible corresponding authors to publish peer reviewed articles open access upon publication at no extra cost.

IReL , which includes RCSI, is participating in Annual Reviews’ “Subscribe to Open” initiative which will make all articles published in the five pilot journals OA from 2020, regardless of the author’s affiliation.

i. Annual Review of Cancer Biology

Further information is available at https://www.annualreviews.org/page/subscriptions/subscribe-to-open-faq

RCSI is now part of an IReL agreement with the BMJ.  The IReL-BMJ agreement allows eligible corresponding authors in participating institutions to publish original research open access upon publication at no extra cost.

Note: RCSI does not currently subscribe to BMJ’s Institutional Fellowship, so RCSI staff and students submitting cases to BMJ Case Reports will need to pay the fees involved.

RCSI is now part of an IReL agreement with Cambridge University Press.  The IReL-CUP agreement allows eligible corresponding authors in participating institutions to publish research open access upon publication at no extra cost.

This agreement provides acces to these titles

Authors from IReL subscribing institutions, which include RCSI, will receive a fee waiver of any potential APCs and/or OA-related costs for publishing articles in these journals.

RCSI is now part of a new IReL agreement for access to, and open access publishing in, three Company of Biologists journals:
• Development
• Journal of Cell Science
• Journal of Experimental Biology
This agreement allows RCSI staff to publish open access articles in these journals without needing to pay article processing charges (APCs). During submission, corresponding authors will be asked to provide details of their affiliated institution and whether they require Gold Open Access. It is recommended that corresponding authors should use their RCSI email address to ensure they are identified and processed correctly.
The agreement is in place until the end of 2022.

Authors from RCSI may publish unlimited open access in ECS journals (Journal of The Electrochemical Society and ECS Journal of Solid State Science and Technology) without charge.

To avail of this, authors must select 'ECS Plus' under 'Step 6 – Open Access Waivers, Charges and Credits' At the time of manuscript submission to take advantage of an article credit.

This IReL agreement is in place until the end of 2021.

RCSI is now part of an IReL agreement with Elsevier.  The IReL-Elsevier agreement allows eligible corresponding authors in participating institutions to publish research open access upon publication at no extra cost.

Further information on the deal at: https://irel.ie/open-access/sciencedirect/

RCSI is now part of an IReL agreement with Emerald.  The IReL-Emerald agreement allows eligible corresponding authors in participating institutions to publish original research open access upon publication at no extra cost.

For any manuscript where at least one author is from RCSI, MDPI will grant a 10% reduction on the published APC for the journal. Only one discount is permitted per paper, and the discount cannot be combined with other available discounts.

Microbiology Society’s Read and Publish agreement is designed for simplicity, minimising administration for librarians and to provide a frictionless OA experience for authors. They have provided the following information for authors submitting articles: Author Journey.

RCSI is now part of a IReL agreement with the Rockefeller University Press. The IReL-RUP agreement allows eligible corresponding authors to publish articles open access upon publication at no extra cost.

Royal Society aim to provide straightforward publishing with Royal Society Read and Publish. They have provided the following instructions on for authors submitting articles: Author Journey.

RCSI is now part of a IReL agreement with the Royal Society of Chemistry. The IReL-RSC agreement allows eligible corresponding authors to publish articles open access upon publication at no extra cost.

Note: there are limitations to the number of papers under this scheme, so the allocations may be used up prior to the end of the year

RCSI is now part of a IReL agreement with Springer. The IReL-Springer agreement allows eligible corresponding authors to publish articles open access upon publication at no extra cost.

Details of the agreement including lists of eligible journals available at www.springer.com/OAforIreland

RCSI is now part of a IReL agreement with Taylor & Francis. The IReL-T&F agreement allows eligible corresponding authors to publish articles open access upon publication at no extra cost.

RCSI is now part of an IReL agreement for open access publishing in Wiley journals.  This agreement allows RCSI corresponding authors to publish open access articles without charge but with certain conditions.

The Green Open Access route satisfies open access mandates by funding agencies such as SFI, HRB and HEA. This model allows you to deposit a version of your article in an institutional repository such as the RCSI Repository.

Knowing which version of your work you can deposit can be difficult to ascertain. Sherpa Romeo can be useful in helping to determine what your rights are; this online resource aggregates and analyses publisher open access policies from around the world and provides summaries of publisher copyright and open access archiving policies on a journal-by-journal basis. Information from here must be double checked against the policies of individuals journals however as policies change over time.

Terminology can differ from publisher to publisher; the table below should help you to decide which version is necessary for your particular needs. 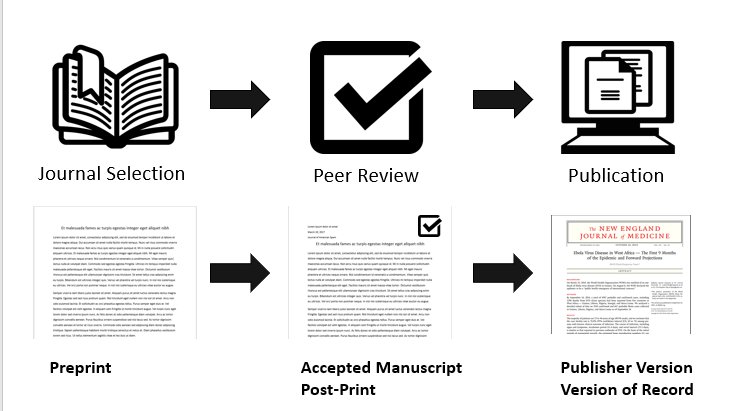 Paywall: The Business of Scholarship

Paywall: The Business of Scholarship (Full Movie) CC BY 4.0 from Paywall The Movie on Vimeo.

Paywall: The Business of Scholarship, produced by Jason Schmitt, provides focus on the need for open access to research and science, questions the rationale behind the $25.2 billion a year that flows into for-profit academic publishers, examines the 35-40% profit margin associated with the top academic publisher Elsevier and looks at how that profit margin is often greater than some of the most profitable tech companies like Apple, Facebook and Google. For more information please visit: Paywallthemovie.com